The Fed delivers hawkishness for the holidays 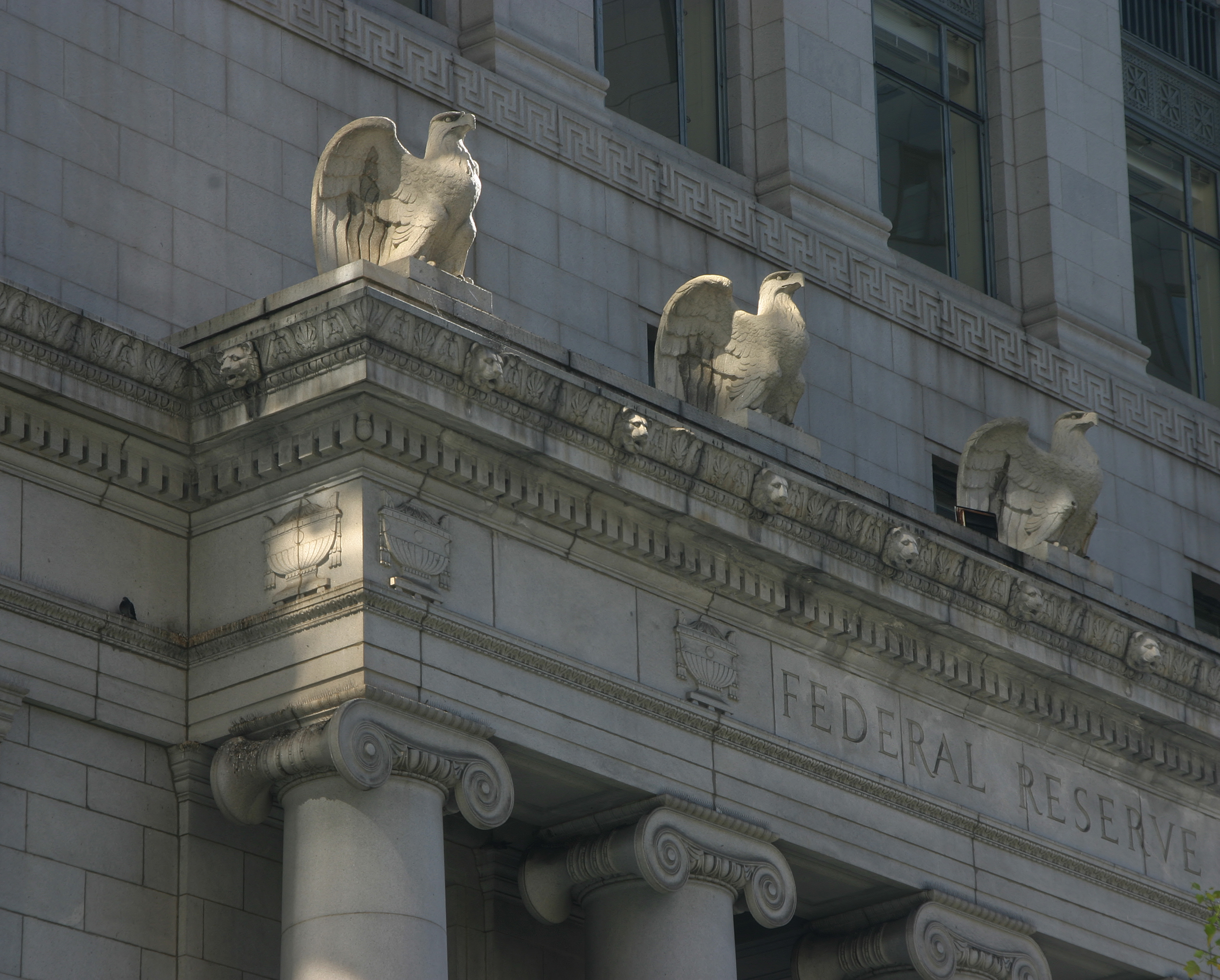 Portfolio Manager Dan Siluk explains why the Federal Reserve (Fed) needed to give the market a reality check and that rates are likely to go higher – albeit at a slower pace – given that inflation risk remains to the upside.

Over the past few months, we have viewed the bond market’s rally with scepticism. Although the last two inflation readings – based on the Consumer Price Index – have modestly beaten expectations, the Federal Reserve’s (Fed) battle against accelerating prices is far from over.

Much of headline inflation’s recent slowdown is attributable to a decline in energy prices. Services, however, remain a major contributor, responsible for 3.9 percentage points of the headline figure over each of the past three months. Imbedded in the services component is the aggressive rise in wages that gives central bankers chills as it can lead to a vicious upward spiral.

Our concern is that investors are misinterpreting the modest decline in inflation as having victory within reach and a soft landing for the U.S. economy a likely outcome. On the contrary, we believe it’s too early to sound the “all clear.” Fed Chairman Jerome Powell has been resolute in stating that guiding inflation back toward the Fed’s 2.0% target is his highest priority. Headline inflation sliding from 9.1% to 7.1% – and hopefully 5.1% soon enough – is arguably the easy part. Much of the late-year decline in prices has been due to a marked decrease in energy and other commodities as supply dislocations are slowly resolved. Getting from 5.0% to 2.0%, on the other hand, will be much tougher. It’s the challenge posed by the latter that we believe the market is underestimating.

This brings us to today’s Federal Open Market Committee (FOMC) meeting. We interpreted Chairman Powell’s comments as a reminder to markets of the task at hand. As had been anticipated, the Fed raised its benchmark fed funds rate 50 basis points (bps) to 4.5%. The real story, however, was the changes made to its Summary of Economic Projections (SEP) for 2023 – especially its expected trajectory of future rate hikes. The Fed now sees the overnight benchmark increasing to 5.1% by the end of next year. This flies in the face of market consensus that the U.S. central bank would be compelled to lower rates by as early as next summer. Instead, the Fed believes it will need to increase rates by between 50 and 75 bps over the next year.

Rather than “pivoting” in mid-2023, the most recent survey of Fed officials indicates that the central bank’s overnight rate will still need to rise to above 5.0% by the end of 2023.

Pause does not equal pivot

Other components of the SEP indicate where the Fed’s priorities lie and what price it’s willing to incur to reach its 2.0% inflation target. Their gross domestic product estimate for 2023 was revised downward to 0.5% from 1.2%, while the expected unemployment rate was nudged upward from 4.4% to 4.6% in 2023 and is expected to remain at that level in 2024. These adjustments align with our view that the Fed has a high threshold for changing policy before the task is complete. Absent something within the economy “breaking” – and we don’t see an obvious potential source given still-healthy business and household balance sheets – we expect the Fed to maintain a hawkish path even if the collateral damage is the risk of a modest recession and higher unemployment.

Reinforcing the work that remains is the upward revision in the median estimate for headline and core inflation.  The Fed’s preferred inflation gauge – the year-over-year change in the core personal consumption price index – is now estimated to finish 2023 and 2024 at 3.5% and 2.5%, respectively, before falling closer to the 2.0% target in 2025. In his comments, Chairman Powell emphasized the necessity for price stability for the economy to function.

Just as futures markets are optimistic in predicting when the fed funds rates will decline, U.S. Treasuries breakevens paint a sanguine picture as to what inflation might average over the next three years. 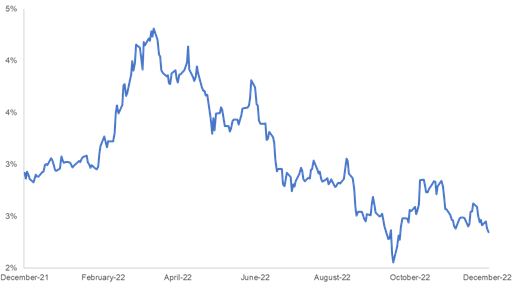 The market is now well schooled in the long and variable lags that occur before rate increases start to impact inflation. Given this year’s historic 425 bps increase, we expect the pace of hikes to subside to allow the Fed to measure how rate-sensitive components of the economy – namely housing and capital investment – respond. But as Chairman Powell forcefully reiterated, the risk to inflation remains to the upside, and the Fed would need to see “substantially more evidence” of slowing inflation before changing course. We believe the Fed would prefer to be late rather than early in pivoting to dovishness, as the latter would likely increase inflation’s volatility and risk cementing higher inflation expectations in the minds of consumers.

Consequently, our view remains that the key risk to bond investors is for rates to creep higher as prices incorporate the Fed’s hawkish resolve. Any increase in rates, however, would pale in comparison to what the market endured in 2022. Importantly – and unlike this past year when there was no place to hide in fixed income markets – it is possible for bond investors to maintain a conservative level of interest-rate exposure yet still earn a relatively attractive level of income thanks to 2022’s rise in rates.

We have been consistent in our view that policy would likely tilt toward higher rates for longer. While today’s comments by Chairman Powell largely validate this – as does the projection for lower economic growth – we caution against the risk of extending duration in an attempt to capture the yield curve pricing in an economic slowdown any more than it currently does. The curve is already inverted, meaning extremely short-dated securities yield more than many bonds in the five- to 10-year range.

The combination of the absence of term premium and the myriad risks present globally – among them the war in Ukraine and a historically tight U.S. labour market – means that both elevated inflation and rate volatility could continue well into 2023. Until there is greater clarity on how this year’s rate hikes are impacting both inflation and economic activity, we believe bond investors should prioritize conservative positioning and improved income generation.

Fixed income securities are subject to interest rate, inflation, credit and default risk. The bond market is volatile. As interest rates rise, bond prices usually fall, and vice versa. The return of principal is not guaranteed, and prices may decline if an issuer fails to make timely payments or its credit strength weakens.
Basis point (bp) equals 1/100 of a percentage point. 1 bp = 0.01%, 100 bps = 1%.
Consumer Price Index (CPI) is an unmanaged index representing the rate of inflation of the U.S. consumer prices as determined by the U.S. Department of Labour.
Duration measures a bond price’s sensitivity to changes in interest rates. The longer a bond’s duration, the higher its sensitivity to changes in interest rates and vice versa.
A yield curve plots the yields (interest rate) of bonds with equal credit quality but differing maturity dates. Typically bonds with longer maturities have higher yields.
An inverted yield curve occurs when short-term yields are higher than long-term yields.
Volatility measures risk using the dispersion of returns for a given investment.

This material has been prepared by Kapstream Capital Pty Limited (ABN 19 122 076 117 AFSL 308870) (Kapstream), for wholesale investors only. It is general information only and is not intended to provide you with financial advice or take into account your objectives, financial situation or needs.  To the extent permitted by law, no liability is accepted for any loss or damage as a result of any reliance on this information. Any projections are based on assumptions which we believe are reasonable but are subject to change and should not be relied upon. Past performance is not a reliable indicator of future performance. Neither any particular rate of return nor capital invested are guaranteed.